The Who, Where, When, What, and Why? An introduction to Utilidork and me Who am I ? My name is Justin. I am a former Walt Disney Wo...

An EPCOT That Never Was
and Always Will Be — Part III

The World of EPCOT 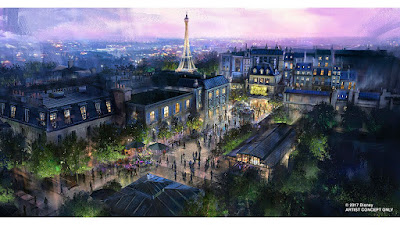 This is part three of my D23 Epcot reaction. (I haven't decided whether I care enough to write about any other D23 announcements) In my first part, I discussed how sponsorship was a huge part of EPCOT Center's backbone, and shaped what the park became. Without financial assistance from corporations and governments, many of the pavilions we know now and knew then would be drastically different, and likely much smaller and less ambitious, than what we got. In Part II, we discussed the new plans for Future World, and touched on the effects of introducing intellectual properties to the park.  In this final part, we will be dealing specifically with World Showcase announcements, and how all of these ideas could come together.


As I mentioned in my Frozen blog a few years ago, World Showcase has always had trouble in the attraction department, in every sense of the word. One ride at opening, with only one more a few years later, a handful of movies, The American Adventure… and nothing more. From 1988 to now, no new rides or even movies have been added. The two rides there have been refurbished and re-themed, but even their infrastructures have gone essentially unchanged.

This is often a bone of contention with unknowing guests. If you're not interested in international shopping or dining, and thirty-year-old tourism movies do nothing for you, there's not a whole lot to do in World Showcase. The indirect result of this is that Future World is usually packed with people, even late into the day. Rides are what Disney refer to as "people-eaters". On a busy day, something like The Haunted Mansion can hold approximately 500 people at any given time. That's not even counting the people waiting in line who are therefore not cluttering the walkways.

For quite a while it has been rumored that Disney would be bringing the Ratatouille ride from Walt Disney Studios Paris to the France Pavilion at Epcot, a rumor that was confirmed at D23. Like any other proposed change to Epcot that does not directly involve a middle-aged man with a red beard and a purple tuxedo, this announcement has been met with mixed opinions. While I think most people are happy to have a new ride in World Showcase, especially one that actually fits in its native country (the film takes place in Paris), there are still those who believe — somewhat justly — that cartoon characters don't belong in the "realistic" environments of World Showcase. When the park first opened, excluding Disney characters was the rule.

But that didn't last long, and Disney's animated and fantasy properties have been appearing in World Showcase with increased prominence over the past few decades. Mickey and friends started showing up in various countries dressed in traditional clothes since the mid-to-late '80s. In the '90s, the princesses started showing up in their respective countries of origin. In 2006, El Rio del Tiempo in Mexico closed and reopened a few months later as Gran Fiesta Tour starring The Three Caballeros. Frozen Ever After replaced Maelstrom in 2016. Now we have Ratatouille moving in.

First of all, I don't believe it was the lack of Disney IPs that resulted in Rio's and Maelstrom's reduced attendance. The rides were old, slow, and noticeably cheap compared to the rest of Epcot. It is entirely possible that a major overhaul to both attractions could have drawn larger crowds, but as large as Frozen did? I don't know…

The advantage to using established characters and scenarios is that it makes communicating who and what the attraction is about a lot easier. Your average first-time Disney guest isn't going to know what a Figment, Dreamfinder, or Imagination Institute is, but they will more than likely recognize Nemo, Dory, and Crush. They can't tell you what a Spaceship Earth or a Universe of Energy is, but they can tell you all about the Circle of Life and how it moves us all. Even Mission: Space and its trip to Mars was meant to tie in with a Disney film that unfortunately ended up flopping both critically and commercially, Mission to Mars starring Gary Sinise (itself loosely based on the former Disneyland and Magic Kingdom attraction of the same name).


Frankly, I think it's past time we got over this hang up that EPCOT must be a sterile, strictly educational, magic-free environment. Some of that magic is important in helping people to learn. The same magic that made us believe a singing frog could overcome an existential crisis about what color he is, also made us believe that a movie theater could transport us back to the mesozoic era.

Perhaps it's the expansion of Walt Disney World, and Orlando in general, that has caused this rift. When the resort only had two parks and no competition, it was okay for one of them to be a drastic departure from the norm. Guests who came to Florida for Disney visited EPCOT Center regardless of whether it was "their thing". A week at Disney World left a lot of time and comparatively few options. A day or two at Magic Kingdom, a day at River Country or Treasure/Discovery Island, a day of shopping, resort exploration, water sports, or golf — if you're into any of that stuff — and, of course, a day at EPCOT Center.

Now, not only do guests have the choice between four Disney theme parks, a water park or two,  a score of resorts, a huge shopping district (plus a smaller one at the Boardwalk), golf, mini-golf, a full sports complex, and seasonal special ticket events; but also (if they feel like venturing off of Disney property) two Universal parks, two newer water parks, Sea World, countless shopping plazas and two major malls, several themed dinner shows, and (as I mentioned in part one) both a WonderWorks and a Ripley's Believe It or Not. That's not even mentioning the various conventions, events, and exhibits in the city of Orlando itself. Having a full-day park that caters primarily to a minority of nostalgic and sentimental guests might sound great to us, but with such a wealth of other things to do, does not look good on the books. A half-full park is a waste of space and a drag on the budget.

Are we losing the spirit of EPCOT? I don't think so, but I also think it's a delicate balance to maintain. Keep too much the same, and you run the risk of alienating new guests, boring non-fanatic repeat guests, or letting the park stagnate thereby losing cultural and technological relevance, something that has already happened at least once in the park's history — arguably twice. Change too much, and EPCOT could lose its unique identity and become yet another homogenized Disney property, its primary purpose to sell toys, T-shirts, whatnots and doohickeys featuring Mickey Mouse, Marvel, or Star Wars characters.

Has Frozen ruined Epcot? Again, I don't think it has, but it opened the door for more IPs entering the park, and that could have either positive or negative results in the long-term. The last thing any longtime EPCOT fan wants to see is a fully overlayed park. Although, to be fair, Frozen Ever After was the biggest opening Epcot has seen in a decade, possibly longer. The Norway pavilion has undeniably seen a boost in visitation thanks to its Frozen ride (more so than Maelstrom had achieved in many years). So again, whatever puts butts in the seats.

What about the rest of World Showcase? What reason would guests have to visit these pavilions that offer little more than shops and a restaurant or two? If a ride based on a film set in Paris draws guests into the France Pavilion, that can only be a good thing, right?

In fact, I say bring on more Disney-themed rides! Blasphamy, you say? Hear me out.

What if at next D23, executives and Imagineers stepped out on stage and told you classic attractions such as Snow White's Scary Adventures and Mr. Toad's Wild Ride were coming back to Walt Disney World with new modern enhancements? That the Florida resort would finally get a version of Pinocchio's Daring Journey and Alice in Wonderland? That Tokyo DisneySea's incredible original attraction, Sindbad's Storybook Voyage, would find a home in the western hemisphere, and the proposed English version of Meet the World would finally have a place as well?

Here's the catch: they would all be built in Epcot.

And since each attraction has a suitable pavilion in World Showcase — Snow White in Germany, Pinocchio in Italy, Alice or Mr. Toad in the United Kingdom, Sindbad in Morocco (a bit of a stretch, but it is an African nation on the Mediterranean, so it still works… kinda… better than Aladdin does, at least) — you're not breaking the atmosphere or even the cultural relevance of the pavilion. There's still Canada to consider, but hey, Brother Bear was a thing, or they can just reshoot O Canada in seamless CircleVision like they're doing with Reflections of China. It's not like Canada has ever been without an attraction.

Not only have you brought several attractions (back) to Walt Disney World for relatively cheap (they've already been designed and built at least once, dramatically decreasing their initial cost), but now almost every World Showcase pavilion would have a people-eater, taking the weight off of Future World's abundance of rides, and shortening wait times across the board.

So do IPs belong in Epcot? Do Disney characters belong in World Showcase? I answer with a resounding "maybe". I don't see any harm in placing characters and IPs in the edutainment park, as long as they fit with their host pavilion. Fairy tales, fables, and legends are a big part of international culture, after all. I'm actually rooting for another refurb of the Mexico ride based on the upcoming Disney•Pixar film, Coco, because it deals directly with Mexican tradition and culture — more so than The Three Caballeros (as much as I'd hate to lose the Audio-Animatronics).

So in light of all of this speculation, will Guardians of the Galaxy or Ratatouille ruin Epcot? Not too likely. Disney and the Imagineers seem to be well aware of the delicate balance required to attract new guests without driving away too many of the old, devoted ones. But we must also be aware that we are a rare and dying breed. The EPCOT Center parents of 1982 are in their sixties and seventies now. Their kids (my generation) grew up in a completely different culture, and saw the emergence and prominence of entirely new forms of entertainment and education, as well as dozens of new theme parks and hands-on experiences. Our children have known nothing but these things. Their Epcot is today's Epcot. In a world of Wikipedia, they don't need a slow-moving non-interactive, multimedia attraction to teach them about new things.

But they might accidentally learn something from Star-Lord…
at August 19, 2017