The Who, Where, When, What, and Why? An introduction to Utilidork and me Who am I ? My name is Justin. I am a former Walt Disney Wo...

An EPCOT That Never Was
and Always Will Be — Part II:

The Future of EPCOT

In the first part, we took a look at the history of EPCOT, its attractions, their sponsors, and how it all affects the so-called "Spirit of EPCOT". So now we arrive at D23 2017, and the biggest announcements for Epcot's Future World have been a "blue sky" redesign of the overall layout, pathways, and the current Innoventions area; a refurbishment for the newest Future World attraction, Mission: Space; and a new Guardians of the Galaxy attraction to take the place of Ellen's Energy Adventure in the Universe of Energy pavilion.


But let's start first with the easy part: the "blue sky" proposal for a complete redesign of Future World. For those who don't know, a "blue sky" proposal is a concept of what could be possible without regards to budgetary, time, or labor restraints. It is the best of the best an Imagineer or team of Imagineers could possibly think of, but with the implication that it may be scaled back to fit more realistic parameters. Unfortunately, Disney have not released an official high resolution version of this concept art, so right now we only have a few enhanced photographs of the image projected on a screen onstage, but DisneyTouristBlog got a particularly nice shot with really good color and contrast, so we're going to use that.

The first thing I noticed was the complete absence of Innoventions Plaza. In fact, all of the buildings of Innoventions are gone, replaced by asymmetrical pathways around tree-filled patches of grass. It actually reminded me of an off-center re-creation of the old Magic Kingdom hub — which would be welcome, if you ask me. Of all the parks, Epcot has always suffered the most from having the least amount of shade from the oppressive Florida sun. 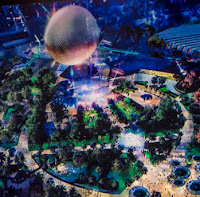 While the loss of the Innoventions buildings is a huge difference, I can't say it's a bad one. Innoventions hasn't seen major attendance since shortly after the Millennium Celebration. Much like the rest of Future World, Innoventions — and its predecessor, CommuniCore — has often had trouble maintaining sponsors and up-to-date attractions. And since the fireworks aren't viewable from the plaza, having a lot of trees around won't be a hindrance. In fact, having a more green, earthy setting will help make Epcot feel more like a city park along the lines of, say, Flushing Meadows or Walt's EPCOT.

The downside is the elimination of seemingly all of Future World's hands-on exhibits, a staple of the park since day one. It is difficult to tell what this would mean in the overall scheme of things. It is possible that Disney's plan is to keep just the ones that are relevant to pre-existing pavilions and relocating them there. Or they might do away with them altogether. Again, they never really were a huge draw. Though it would be a shame to lose them altogether. They were a feature that was unique to that park.

Also on this concept art was what appears to be several indoor and outdoor pavilions southeast of Journey into Imagination and north of World Showcase Lagoon. No details were given about these either, but it's speculated that they may be permanent locations for Epcot's growing number of annual festivals such as Food and Wine, Flower and Garden, and the new Festival of the Arts. The largest of these pavilions may also be used for premium viewing of IllumiNations.

Finally, a less discussed feature of this design is what appears to be a hedge maze between the Land and Imagination pavilions. Nothing else can be said about this except… well, look at it. There it is. It's right there. All hedgy and maze-like.

Another plan they announced was the refurbishment of Mission: Space, with new CGI for the Orange Team (spinning) version, and an all new, tamer experience for the Green Team (non-spinning) version. The Orange Team refurb is basic enough. Just improve the visuals with something that looks a little less like a GameCube game, and keep everything else the same.

The Green Team, formerly a "less-intense" version of the Orange Team experience, has been replaced by an in-orbit flight around planet Earth, a much tamer story for an already much tamer experience. Personally, I thought the original Green Team was done quite well, but hey, this gives me a reason to ride both next time.

At the same time, Disney announced a new space-themed table service restaurant for Future World. Although its exact location was not revealed, fans are already speculating the Wonders of Life pavilion as a likely candidate, with its semi-spherical domed shape being perfect for an all-enveloping projection effect, and its position right next door to Mission: Space tying the two pavilions together geographically as well as thematically.

Needless to say, the Guardians of the Galaxy attraction replacing Ellen's Energy Adventure has generated a vast majority of controversy. Having already seen pavilions like Imagination, the Seas, Norway, and arguably Transportation (Test Track 2.0 has a lot of presentational similarities with recent TRON entries) succumb to franchise-related re-themes, the idea of losing another EPCOT Center original to a decidedly non-EPCOT-compatible IP is disappointing, to say the least. Disney tried to soften the blow by revealing a (poorly) photoshopped image of a young Peter Quill, a.k.a. Star-Lord, standing in front of Spaceship Earth, claiming that he visited EPCOT Center in the '80s, before his abduction. 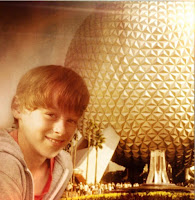 They continued to talk about their determination to double down on the guiding principles of EPCOT, and create new experiences that will feel at home in the park — this statement was backed up on Twitter by Guardians director, James Gunn — creating a juxtaposition of ideas. On one hand, outside IPs in general tend to feel out of place in Epcot. On the other hand, it sounds to me like reassurance that the Marvel franchise will mostly be a Trojan horse for a new edutainment experience featuring more up-to-date characters, much like Bill Nye, Ellen DeGeneres, and Alex Trebek were in the '90s. Will using fictional characters instead of real-life celebrities help make the attraction more timeless? We shall see.

As of this writing, any of these details about this ride are mere speculation outside of the realm of Imagineers. It is entirely possible the new attraction will have nothing to do with energy or education, and will just be a themed thrill ride. Is that bad? Possibly, but not necessarily. Having a Marvel IP in the park, even if its ride is not educational, would still draw guests into the park; and while they're there, they will most likely still ride Spaceship Earth, Test Track, and (for some reason) Living with the Land. But will they enjoy them, or complain that there aren't more rides like Guardians? And if they don't enjoy the more informative attractions Epcot has to offer, who's to say they wouldn't have complained either way? Unfortunately, as I've mentioned in a previous post, Epcot has always had a hard time appealing to a wide enough audience to support itself and maintain its identity.

My biggest question about this decision is, if Disney are going to re-theme a Future World pavilion with a sci-fi franchise, why Universe of Energy and not… I don't know… Mission: Space?! I suppose attendance had everything to do with this decision. I'm sure I haven't waited in line for Universe of Energy since the mid-'90s. That's usually not a good sign for any attraction.

For now, I'm remaining cautiously optimistic (as always). Most of the changes made in the past decade or so have been positive, including the ones people originally complained about. Let's not forget that the attraction Guardians is replacing was actually a more entertaining and topical version of the very dry and informative ride that opened with the park. Guardians might turn out to be a good addition. At the very least, it should be a popular one. And if it does keep with the original spirit of EPCOT Center, even better. Regardless, Future World needs something new and exciting, and a twenty-plus-year-old, slow-moving, three-quarter-hour-long ride about energy, originally sponsored by a fossil fuel company and starring has-been celebrities from the '90s, does not fit those criteria.

I guess we'll know for sure in a few years.

Next, onward to World Showcase for my third and final part!

All images of concept art provided by Disney on their official website
at August 14, 2017